Girls in the Gorge! 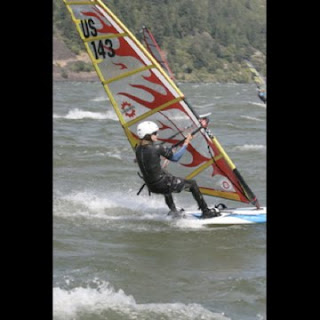 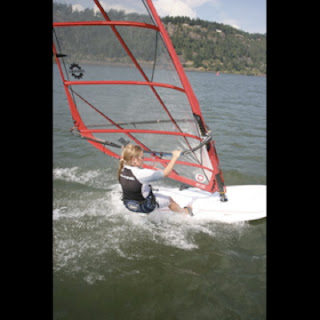 The 2009 Nationals in the Gorge had one of the biggest junior girls fleet ever!  With Marion Lepert of San Francisco (who handily took first place), Lene Botha from Abilene, TX, Margot and Charlotte Samson from Florida, Solvig Sayre from Martha's Vineyard and gorge locals (in the summer anyway) Fiona Wylde, Alyson Fromm, Kelly Watermeyer and Audrey Davis - there were girls ripping around the race course everywhere you looked!  I hope the rest of you windsurfing girls join us at an event or training camp soon.....
Posted by Karen at 10:37 PM No comments: 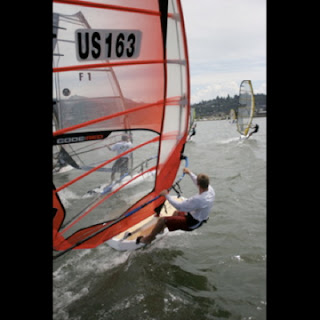 Is it really September already?  The calendar says it's so, and school is back in session and a whole lot of you have some great "what I did on my summer vacation..." stories!
Floridian Cullen Ahearn raced in Hood River at Nationals at his first big Formula event.  This is what he had to say about the first day of Formula racing:
I was on my 10 meter and the wind was very up and down, anywhere from 7 to 17 mph.  After every tack and gibe I had to pump a lot to get going again.  In the first race my start was good and I was second around the top mark, but with good angles and lots of pumping downwind I was able to pass and hold the lead until the finish.  We went back to the beach and the wind died again to almost nothing and we they decided it was a good time for lunch.  The wind picked back up to about what it was in the first race and we were sent out again. I had another good start and was first around the top mark and held it on the downwind. Around the bottom mark it was very light because it was very close to shore and I was pumping a lot. On one of the pumps I snapped my fin and that race was over for me.  I went out in the third race looking for revenge and was pumping very hard to get another bullet. I  was in good shape as we were nearing bottom mark with a good lead but I made the very dumb mistake of going to the wrong mark.  Fortunately only 1 person passed as I had to do 2 more gibs downwind to make the right mark.  I was too far behind to catch up but I held second. The fourth race was incredibly light and I was pumping the whole way around and got a solid first, but unfortunately after I had already finished they abandoned the race.
You can read more about Cullen (and an interview, watch out for the paparazzi!) at www.windsurfingtour.com/?p=413
Chris Gardiner (also from Florida) and Solvig Sayre (from Martha's Vinyard) got their first taste of international RS:X competition at the ISAF Youth World Championships in Buzios, Brazil and then flew straight to Portland for Nationals.  Chris won first place in the Junior Formula fleet at Nationals and was super stoked.  Controversy abounded on the beach with the Gorge junior racers pondering what effect it would have on the results if they had Formula boards instead of Formula Experience boards, Cullen wishing he hadn't broken a fin in one race and Chris wondering if his sails have less low end than Cullen's.  Everyone is eager for a rematch next summer in San Francisco at the 2010 Nationals.  Chris had this to say about the event:

Day one of the 2009 windsurfing nationals started out windy and sunny, and it only got windier. At the skippers meeting it was announced that we were going to race slalom for the day, because it was so windy, which was really cool because I had limited experience with slalom so it was great practice. The first four races I rigged a 5.9 TR-5 which was still super overpowered because the gusts were reaching close to 40. Then it got even windier so I downsized to a 5.0 and kept racing hard. I got much better throughout the day, and went from getting 7th’s and 8th’s to 3rd’s and 4th’s.

Day two started out slightly less windy than the first, but still really breezy. I rigged a 6.6 TR-5 and started to do some serious work, and finally figured out how to jibe, bending your knees really does help in chop! I was getting 3rd and 4th every race and even got a 2nd in one, which I was really stoked about. Then the wind started dropping a little bit and the holes were everywhere, and at that point the lighter sailors started to prevail. This was the end of the slalom series and I finished 4th overall out of 20 or so.

Day three was the beginning of the formula racing, and started out glassy, however by mid afternoon the wind had filled and we got in a couple good races. I was rocking the starts and was 1st around the windward mark every time, but I found that I was a bit slower on the downwind, and the second place racer was usually very close to me by the downwind mark. Then every race, at the bottom of the course there was a massive lull, and my board just would not plane through it, making for some tight racing as the rest of the fleet caught up. I ended the first formula day tied for first, but then they threw out the last race due to lack of wind, so I was in first place alone.

Day four started out even lighter than the third, with the east wind trying to fill in, and we only got two races off. The first race, I came in second, even though I was first around the windward mark I lost it on the downwind, and I was tied for first going into the last race of the series. They moved the course further up the river towards the hatchery in an attempt for more wind on the last race, so I knew there was going to be some wind involved. Instead of rigging down, I decided to have a little extra power should I need it so I just down hauled my 10.0 a little harder. Sure enough, when I got out there, it was windy. I knew that this race decided the regatta, so I went out half an hour early and did my homework, making sure I knew where the favored parts of the course were, which end of the line was favored, etc. and it paid off. I got the best start by far, hitting the pin at full blast as soon as the gun went off, tearing upwind, with the person tying me for first behind me in my dirty air. I as first around the windward mark, but seriously overpowered so I played it safe on the downwind, which was a good idea, because one person passed me then promptly crashed, and multiple others crashed behind me. With all these crashes, I just had to get around the course without falling myself, which I did, staying towards the flat water, and playing shallow angles on the downwind, and with that, I won the race, thus winning the junior formula class!