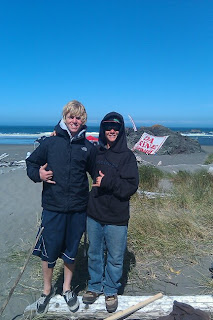 The junior fleet at the Pistol River Wave Bash was full of talent! Zane Schweitzer and Bern Roediger from Maui took the top two spots respectively with their talented performances that showed their years of experience in the waves. Morgan Noireaux (who also lives in Hawaii, but is from France) rounded out the top three. The sole junior girl entry was Fiona Wylde from Hood River. Here is her story:

When we arrived at Pistol River it was howling! The pro's were on 3.7's and saying they could be happy on a 3.0. My good friend Ben Grodner had never sailed in the waves. The waves were not all that big, but big enough to definitely get pummeled and have to swim after your gear. We arrived and we saw Ben's mother Linda, running down the beach with a nervous look on her face. She was running after Ben who's gear got away from him and he couldn't get to it. I knew Ben would be ok, but this was not the introduction I wanted my mom to see about sailing there.

The next day there wasn't any competition so we were able to go sailing and learn how the waves work there. It was still probably blowing 25-30. I thought I got the hang of it my first try. I made it out, got some jumps, and sort of rode a wave back in. I was super happy that hadn't gotten washed! I went out again. My second try wasn't as glamourous as the first. I got over two waves and then the third waved mushed me. I went swimming! My gear was a ways in front of me and I just had to keep swimming. I am not sure if I mentioned it, but the water was about 45-50 degrees F. It was so cold! Later that day I went out a couple more times and we called it a night.

The next day was the first day of competition. I was in two heats the Junior and the Women's heat. In my first round of the Junior's, I made it out, got some jumps and rode some waves! I was super excited, and I became even more excited when I advanced to the second round! I was so happy because it was my first wave competition and I advanced! Then I had a Women's heat and I did ok. In the women's heat there is no elimination because there was four of us so we just ran heat after heat. In the next heat of the juniors I got washed and I spent the whole heat swimming. I was also up against two boys from Hawaii, I don't think that helped all that much. By the end of the day I sailed 2 heats of the juniors and 3 heats of the women's so I was pretty tired.

The second day of competition I got to sail with the Juniors again because of the double elimination. Double elimination means everybody gets two chances to move on. My first heat was With the Juniors and I didn't do so well. I went swimming after my gear, again. I was out of the Junior for the rest of the competition. In a way I was ok with not having to sail so many heats. In the women's division we sailed three heats and I came back to the beach where I started in all of them but one. I did not place but I had an amazing time, and I learned a lot about wave sailing! I am hooked!