Marion's Report from the Techno 293 World's 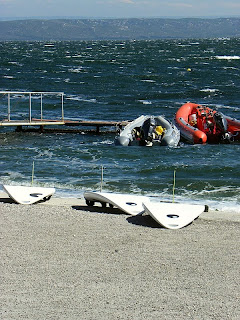 This year’s Techno 293 World Championships was one to be remembered. There were over 400 competitors and winds ranging from 0 to 55 knots. I was eager to see how much I’d improved since last year’s Worlds, and I’d set myself a goal to finish in the top 10. I met the US team in Martigues on Saturday evening, and there were already 40 knots; I was thrilled. The following day we registered, and got our charter gear together. On Monday, we had our equipment inspected, and then we went out on the water at around 1: 00 pm. The wind was great with +20 kts. Unfortunately, around 2:30 p.m. the wind started picking up to the point where I was just getting myself exhausted; so I came back in, which was not an easy task as there were about 400 people there trying to launch at the same time. I ended up missing the practice race, but since more than half the fleet did not do it either, I did not mind. In the evening there was the opening ceremony followed by some Tahitian dancing.

Tuesday was too windy to race, so we had our first races on Wednesday, and we got out on the water at 6:00 pm. I finished 12th and 22nd, the latter one being raced in very light wind. I had the most trouble with my starts because I couldn’t figure out how to sight the line properly. I did better on Thursday, finishing 9th, 13th, and 8th because the wind was more consistent, blowing about 15kts. This made it easier for me because less pumping was involved, and since I could point higher than most girls, I was able to recover from my bad starts and move up to the top of the fleet. On Friday the girls did not get to go out because the race committee believed it was too windy for us. Unfortunately, Saturday was very light. In our first race, which had about 5 to 10 kts, I finished 31st, and we all had to be towed in because the wind disappeared after we finished. Surprisingly, my best race was the following one in the afternoon in which we also had very light winds. I had a terrific start because I port tacked the entire fleet, so I was ahead of everyone for a few minutes. Unfortunately, this didn’t last long because other girls pumped better than me, so they ended up passing me. I ended up finishing 7th in that race. In the end, I finished 11th, and just one point behind tenth place.

Overall, I had a great time. I met a lot of people, learned a lot, and I now know what I need to work on if I want to make it to the podium next year. I have to say that I was disappointed that the girls did not get a single race with the centerboard up, but I did get to see how well I’d improved in my light wind sailing. This was a great event, and I’m looking forward to competing at the Worlds again in San Francisco next year. Hopefully they will let girls go out when the wind blows above 20+ kts which does not seem to be the case in Europe...
A great thanks to my parents, my grandparents, Britt, and the St. Francis Yacht Club Foundation for all of their support.
-Marion Lepert
Posted by Karen at 5:29 PM